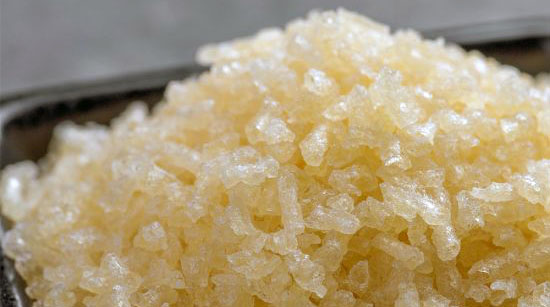 Gelatin is a colloidal protein and the oldest macromolecule material. It comes from the hydrolysis of collagen found in the skin, bone and connective tissues of animals including cattle, poultry and aquatic animals. Collagen is the major part of the connective tissue and forms much of the proteins of the skin, veins, connective tissues, and bone and cartilage proteins. These materials are dissolved in boiling water and hot water, vapor and produce gelatin.

It is used in the food industry for making marmalades, jellies, sweets, ice creams, etc. It is easily absorbed into the body and contributes to the better digestion of other food through the formation of emulsions with fats and proteins. Gelatin is used as a clarifying agent in drinks and fruit Juices and in the pharmaceutical industry for the preparation of pharmaceutical capsules and tablets.

Some of the world’s gelatin is made from pig skin and bone, which according to Islam, cannot be used in Muslim countries. Also, a lot of livestock has been infected with the Cow Madness disease in different countries so far, and there is a risk of it being transmitted to humans by the gelatin produced from the skin and bones of these animals.

Gelatin substitutes include pectin, CMC, guar gum, carrageenan and other gums. They have gelling and thickening features, but none can be an absolute substitute for gelatin.

An important factor that determines the value of commercial gelatin is gel hardness. This hardness is characterized by gel strength, called bloom gelatin. The higher the gelatin bloom, the higher the degree of gel hardness.

Gelatin application in the chocolate and confectionery industry:

-Gelling and gloss agent for jellies

-Marshmallow as a foaming agent

Gelatin application in the dairy and ice cream industry:

-In creams as water blocking agent, stabilizer and thickener

-In yogurt as a thickening stabilizer

Gelatin application in the meat and food industries:

-In bologna and sausages as water binder

-In ready meals and sauces and in canned dishes and soups

-As a condenser and a water reducing agent available for microorganisms

Gelatin application in bread and dough:

– Enrichment of the product with the amino acids